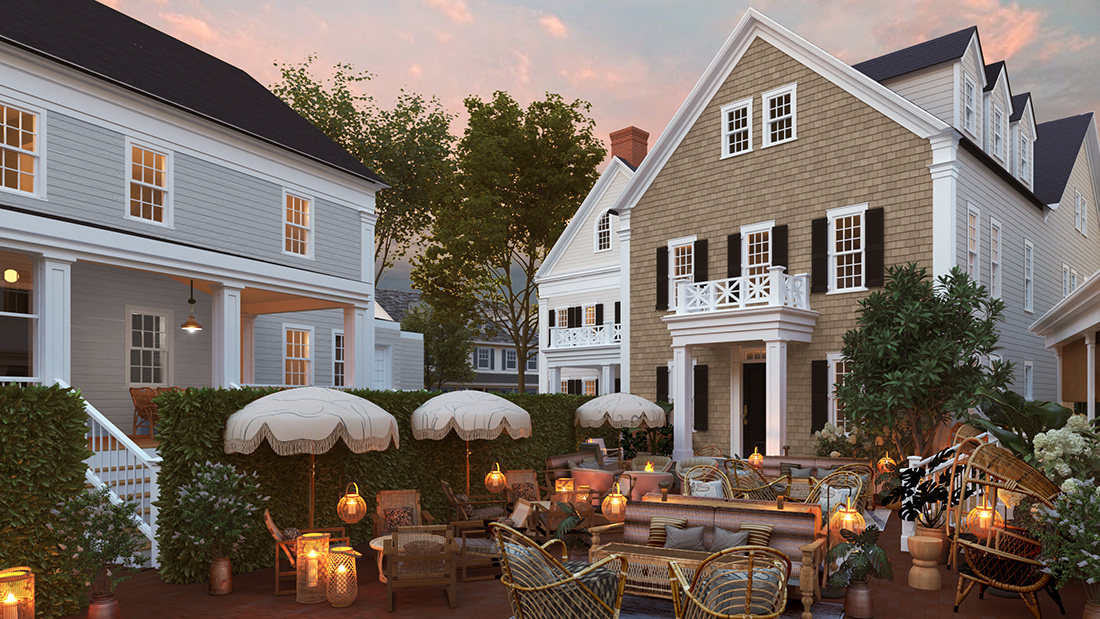 It’s not that the partners of Blue Flag, a Boston-based real estate development company, don’t appreciate shiplap and navy blue stripes; they’re simply excited to do something different. “We’re bringing a boutique lifestyle hotel like those we love in London, Paris, and New York, to the middle of downtown Nantucket,” Jason Brown, a Blue Flag partner, says.

The inaugural season of Faraway Nantucket kicked off this June on the site of The Roberts Collection, an upscale inn that Blue Flag purchased in April 2019 with the intention of creating a more offbeat destination. The 62-key hotel inhabits the property’s four buildings—a former 1880s Quaker meeting house, two historic homes, and an eight-year-old gatehouse—all assembled around a brick courtyard.

Brown, who lived at the Soho Grand Hotel in Manhattan as an intern when it first opened in 1996, cites the quirkiness that Ian Schrager’s of-the-moment establishments infused into the New York hotel scene in the 1980s as an influence. André Balazs also made an impression. A favorite spot is the hotelier’s Chiltern Firehouse, a late 19th-century fire station turned boutique hotel in London. “The indoor/outdoor restaurant feels like a secret garden,” Brown says.

Blue Flag fashioned a similar setup with Sister Ship, Faraway’s 140-seat restaurant and bar that opened in July. The eatery will serve lunch and dinner inside as well as on the covered porch and the courtyard patio where rattan chairs and fringed umbrellas feel casually cool against the buildings’ shingled and clapboard façades with fretwork balconies and privet hedges. “Sister Ship is the heartbeat of the property,” Brown promises. “A true hotel lobby lounge and cocktail club tangled into one.”

Faraway’s aesthetic comes from a mythic mistress of the manor, a stowaway of sorts. “Faraway’s inspiration is a young woman who grew up on the Island, stole away on a ship, and returned decades later with a pile of treasures,” Brown says. “We designed the space to feel as though she dropped her haul in the center of this collection of old houses, then opened it to those looking for fun.”

The hotel’s maximalist schemes are about as far away from Nantucket nautical as one can imagine, though stained, checkerboard-patterned floors and millwork painted a stormy blue hue are historical nods to New England. A sepia-toned chinoiserie mural lines the walls of the lobby, where a harbor scene with old-time sailing ship and spouting whales hangs over a fireplace flanked by carved curule chairs with awning-stripe cushions.

Inside the restaurant, global textiles, Japanese-style lanterns, and greenery in funky terracotta pots conjure a market vibe with a touch of Art Deco and Victoriana. A marble bust of a siren bedecked with seashells and semi-precious gems is mounted above the bar. “We selected artwork through the lens of what our fictional female captain would have collected on her travels,” Brad Gaudi, a Blue Flag partner, says.

Guest rooms are more sedate, done in pale neutrals, dusky blues, and natural materials. (Rattan, we’re still looking at you.) Custom wood and rope wall hangings hover over every bed. “Rooms are plush and comfortable, but not in the usual five-star way,” Brown says. Rather, they’re made to feel residential, as if you are indeed the bohemian doyenne’s guest. Brown says they expect visitors will find a room or two that become favorites over time. The quad bunk rooms will certainly be a hit with families. “We know from experience that it can be hard to travel to cool places with little kids,” Brown says. “Families will fit in here.”